Objective: The traditional way that a doctor conducts clinical visual inspection using an optical microscope has the advantage of its being very mature technology. However, it has the disadvantage of being bulky, expensive and inconvenient to use for a long stretch of time. The objective of this project is to develop a new dual-lens 3D stereoscopic surgical microscope, that is light weight and easy to move, and can work with a large range of digital control and display. The system uses a 3D screen to display 3D image. The whole system uses an electromagnetic brake with weightless suspension mode which in addition to improving physician’s operative space also greatly enhances the convenience in performing procedures.

Description of the technology and method of its use or application: In optics, we use two full-HD CMOS sensor, and modify the firmware IC to achieve the best image quality. The least restrictive video acquisition speed is 30 images per second (FPS). An auxiliary lighting of LED is used, so that we can reduce the delay and fuzzy feeling of the screen. To facilitate the operation of the device by the physician during surgery, we use an electromagnetic brake system with six-axes. The degrees of freedom of the brake system can be adjusted in angle and position. The torque is used in “zero gravity force balance of design”, with the entire system to achieve the best balance of weight. A stabilized braking system can be started, regardless of any angle and direction. The software is the most important component of this digital optical lens application, since to synchronize two optical lens is a challenge. A statistical learning algorithm is applied in our application that can quickly auto-correct the position of the lenses, and improve the precision and stability of the image. On the screen, interlaced format of the stereo image is used to reduce 3D screen display delay. The system provide 3D visual effects on a screen which traditional microscope can’t show, so the clinician and his entire team can get more information about the surgical anatomy at the same time. 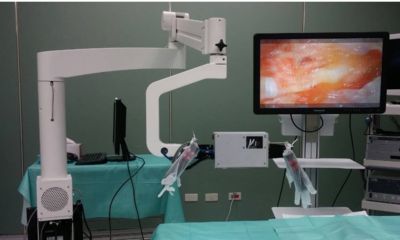 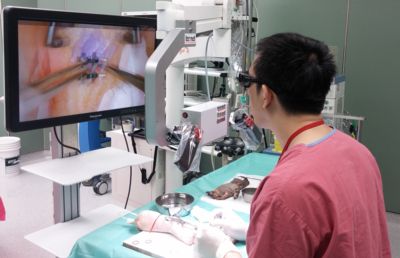 Preliminary results: The system used six-axes holder that quickly moved optical lens to the destination and could quickly auto focus and position the lens. The visualization was done on a screen with high-definition 3D stereo mode play to the big screen.  The entire system was applied for dissecting animal (avian) tissues. The system was used by 10 physicians and a feedback regarding the performance of the system was obtained in the form of questionnaire. The feedback suggested the system was stable and could be used for clinical purposes.

Conclusions / future directions: The system is still in the prototype stage, however, the functionality of the system such as controlling each lens for focus and tilt, and adjusting the LED brightness is easily to manipulate which facilitates physician’s use. The system would be further applied to actual surgeries on animals and humans to assess its significance in different kind of surgeries.