Introduction: Studies have suggested that vitamin D plays a role in glucose homeostasis and vitamin D deficiency (VDD) may be associated with lower rates of resolution of T2DM after surgery. This study aims to compare nutritional variables in both sleeve (SG) and bypass surgery (RYGB) in type 2 diabetes mellitus (T2DM) patients, and analyze the relationship between vitamin D levels and T2DM remission post-operatively.

Methods and procedures: Data from the Ontario Bariatric Registry was used for this retrospective study to determine the prevalence of VDD and T2DM remission after Bariatric surgery, followed by analysis of the relationship between these outcomes and other variables during a 3-year follow-up after SG or RYGB. 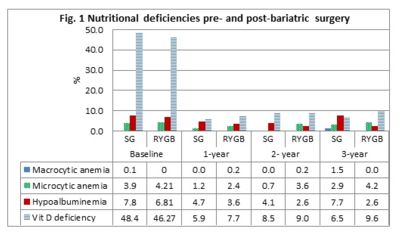 Conclusions: Vitamin D deficiency is prevalent among diabetic patients with obesity presenting for bariatric surgery. The postoperative management was successful in addressing VDD following surgery; those who experienced T2DM remission after surgery were less likely to be VDD. Further prospective studies are needed to explore this relationship.