Introduction. StomaphyX is a natural orifice transluminal endoscopic procedure to reduce gastric anastomosis and pouch size following RYGB. We characterize the safety and efficacy of this procedure to treat insufficient weight loss and recurrence of comorbidities.

Methods. At an academic institution, between 2008 and 2011, 19 patients underwent StomaphyX. BMI, comorbidities, and complications before and after RYGB and StomaphyX were recorded. 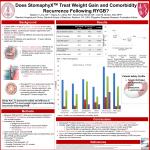