Does Gastric Bypass Resolve Cardiac Comorbidities Equally for the Obese Vs Super Obese?

Background: Coronary artery disease (CAD) is the leading cause of death in the industrialized world with obesity as a leading preventable risk factor for CAD. Certain biochemical cardiac risk factors (BCRF) have demonstrated strong prediction for cardiovascular events. Obese (BMI < 50) and super obese (BMI >50) have been shown to improve certain BCRF at 1 year post-op; however no study has directly compared the 12 month BCRF improvements of obese vs. super obese patients undergoing laparoscopic gastric bypass.
Methods: At a single academic institution (2004-2009), we measured BCRF in 833 consecutive gastric bypass patients preoperatively and at 12 months postoperatively. All RNYGB surgeries were performed by a single surgeon with a 30cc pouch and a 100cm Roux limb. Patients were divided into two groups: obese (BMI<50) or super obese (BMI>50). BCRFs included total cholesterol (TC), triglycerides (Trig), low-density lipoprotein (LDL) cholesterol, high-density lipoprotein (HDL) cholesterol, lipoprotein(a) (LpA), homocysteine (HmC), high sensitivity C-reactive protein (CRP), fasting insulin (FI), and hemoglobin a1c (HgA). Post-operatively, all patients discontinued statins. Pre-op and 12 month post-op weights and lab values were compared by a paired t-test of equal variance.
Results: Preoperatively, the two groups (obese/superobese) significantly differed on the basis of BMI (43/56), female gender (86/76), and CAD (5/9). Post-operatively, resolution rates for hypertension and sleep apnea did not differ. At 12 months post-op, obese patients (n=589) had lost 86% of their excess weight and had significant improvements in all BCRF except Lp(a). In comparison, super obese patients (n=244) lost only 64% of their excess weight and had significant improvements in all BCRF, including Lp(a). While BCRF improved significantly in all patients, obese patients had significantly better improvements in LDL and Lp(a) than the super obese. The one year percent improvement in BCRF differed as follows for the obese vs super-obese respectively: TC (22/19), LDL (31/27), HDL (32/28), Trig (40/37), LpA (82/52), CRP (154/92), FI (12/12), HgA (68/68).
Conclusion: In this study, while the obese group had greater weight loss than the super-obese, both groups demonstrated significant weight loss and improvements in BCRF at 12 months post-op. 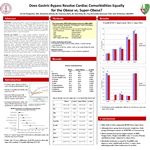