Does esophageal manometry influence surgical decision-making for operations at the gastroesophageal junction?

Introduction: This single institution retrospective study was performed to determine the percentage of cases in which the results of esophageal manometry altered the intended surgical plans for foregut surgery.

Manometry is potentially helpful in avoiding the performance of antireflux surgery in a patient with undiagnosed achalasia. More commonly, a patient who appears to be an excellent candidate for a Nissen (360 degree) fundoplication can be found at manometry to have significant impairment of esophageal function and can be considered for a partial fundoplication. However, esophageal manometry is not available in every institution, it is often an unpleasant exam for the patient, and requires specific expertise from the staff and physicians who both perform the exam as well those that interpret the results. For these reasons and others, there is often debate regarding the value of esophageal manometry.

Methods and Procedures: Data was gathered on all manometry studies performed at a single institution from 2012 through 2016. Data on manometry results, diagnosis, preoperative assessment and other GI workup including Upper GI x-rays, 48 hour pH studies, Demeester scores, upper endoscopy and biopsy reports were reviewed. Those patients who were further evaluated by the surgeon who performs the vast majority of foregut cases at a single institution were included in final analysis. Patients who underwent manometry at outside institutions prior to presentation, or manometry at our institution but had further evaluation and surgery at other hospitals were excluded. A determination was then made by a single surgeon, blinded to the patient identity and without knowledge of the manometry results, for the most appropriate procedure. Manometry results were then exposed and the procedural plans were revised as needed with subsequent correlation with the actual procedure proposed and performed for each patient. These alterations in the surgical plans due to manometry results were then evaluated.

Results: Of 299 manometry studies identified, 114 were completed and reviewed by a single surgeon. Within that group 45 underwent Nissen fundoplication, 39 patients underwent Toupet fundoplication, and 12 underwent Heller Myotomy with Dor fundoplication. Overall, in 52% of cases (59 patients) manometry was found to have altered the planned procedure.

Conclusion: This retrospective, single institution study demonstrates that results from esophageal manometry influenced and altered surgical decision-making with an experienced foregut surgeon despite having the results from other diagnostic modalities available. 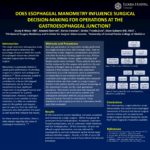