Introduction: Loop Duodenal Switch (LDS) is a modification of Roux en Y duodenal switch. This technique can result in fat and starch malabsorption.  In a small percentage of patients’, a relevant qualitative and quantitative change in stools happens usually characterized by steatorrhea-like diarrhea—a side effect that some patients report as disabling because it may give rise to relevant social and family-related conflicts.  Bismuth Subgallate (Devrom) has been marketed as a way to eliminate the odor associated with flatulence and bowel movements.

Objective: The objective of this study is to see the efficacy and effect of bismuth subgallate (Devrom) on the QOL in patients undergoing LDS.

Method: A Prospective, Randomized, Double-blinded, Placebo-controlled, Crossover study was designed to assess the efficacy and effect of Bismuth subgallate (Devrom) on the disabling steatorrhea and related odor. Patients who reported flatus and/or stool odor changes and have at least completed 6 months post LDS were included. Patients participated in 2 treatment periods, each lasting for one week, separated by a 1-week washout. Patients received 200mg Bismuth subgallate, 2 capsules per meal (6 per day) or placebo for 1 week each. The Gastrointestinal Quality of Life Index (GIQLI) questionnaire was used to compare the QOL before the initiation of the therapy and after each treatment completion. GIQLI questionnaire evaluates digestive symptoms, physical status, emotional status, social performance and treatment effects.

Result: Thirty-Six patients with a mean age of 48 years (55.5% woman) were included in the study. Of 36 patients, 5 patients lost to follow-up and 2 were withdrawn from the study. Data for 29 patients were included. GIQLI scores obtained at bismuth subgallate treatment completion were significantly higher both overall (P=0.007) and in the digestive domain (P<0.001) than those obtained before the treatment. GIQLI score obtained from the other domains were also higher compared to the pre-treatment as well as placebo treatment but not statistically significant. 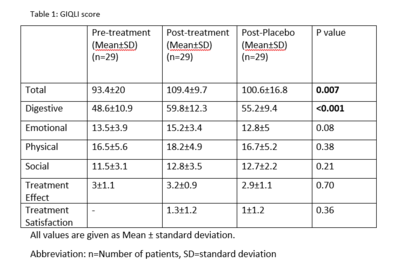