BACKGROUND: Laparoscopic approach has gained acceptance in the surgical treatment of Crohn’s disease. In some cases a laparoscopically completed operation requires enlargement of the extraction site to exteriorize a large or inflamed specimen. The effects of this increase of incision length on perioperative outcomes have not been previously investigated.

MATERIALS AND METHODS: Data from 266 patients undergoing laparoscopically completed intestinal resection for Crohn’s disease (no hand-assisted) from 1995-2008 and reported in an IRB-approved, prospectively collected database were collected. We compared 44 patients who required increased length (IL) of their extraction site with 222 patients whose procedures were completed through their initial extraction site (NIL). Variables analyzed included demographics, perioperative details including morbidity and postoperative recovery by using Fisher’s exact, Chi-squared and Wilcoxon test when appropriate. 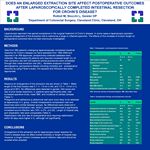