Does a Surgical Operating Platform Shorten the Learning Curve for Single-incision-laparoscopy?

Objective: In single-incision-laparoscopy (SIL), crossed instruments together with the proximity of the endoscope inevitably interferes with smooth movements, and has been shown to be more mentally demanding than the standard laparoscopic approach (SL). Novel developments such as triangulating operating platforms, aim to overcome these drawbacks and provide true right/left manipulation. However, due to the novelty of this surgical approach, the required learning curve to reach proficiency might be even more challenging. The aim of this study was to compare the early learning curve of a single-port surgical-platform (SPSP) with that of SIL and SL.
Methods and procedures: Six participants with different laparoscopic experience levels (naïve, intermediate, expert) were tested with a validated intracorporeal suturing task (FLS) performed with either a SPSP (Spider-System), or a SIL-approach with crossed/articulating instruments. SL served as the control. During a 4-week training period (two sessions/week), suture performances with the three different techniques were assessed. All sutures were evaluated using FLS-scoring methods for suturing. A previously defined level of proficiency (two consecutive proficient suture scores at or above 93.7, followed by 10 non-consecutive proficient sutures) was used. After each individual session, participants rated their related subjective mental workload by a validated tool (NASA-TLX).
Results: Within the four-week training period it was observed that, compared to the SIL approach, a significantly higher number of proficient sutures were achieved with the SPSP (9.7% vs. 18.0%, p=0.041). However, both were significantly lower than the number achieved with SL (87.5%; p<0.01). No participant obtained the pre-defined level of proficiency with the SPSP or SIL.
The experts, who were proficient in laparoscopic suturing, achieved a median of 9 sutures (37.5%) with the SPSP, at or above the proficiency score. Only a median of 5 sutures at this level were accomplished with the SIL approach (21%).
Although the intermediate group was also found to be proficient in standard laparoscopic suturing, each participant achieved only 2 successful attempts with SIL and a median of 2.5 (range: 0 to 5) proficient sutures with the SPSP.
None of the novices accomplished a proficiency score ≥ 93.7 with the SIL approach. With the SPSP, one naïve participant achieved three proficient sutures. Interestingly, even without any previous surgical experience, naïve participants easily achieved proficiency with SL during the 4 weeks.
Evaluating the best individual scores achieved with the SPSP and SIL, a residual median performance gap of 15% (range: 9% to 25%) to SL was observed.
Mental workload of the experts decreased during the SPSP and SIL training and were finally comparable to the level of SL (score of less then 30). On the other hand, the less experienced participants still indicated a higher mental workload for SPSP and SIL.
Conclusion: Compared to SIL with crossed instruments, a surgical operating platform appears to be beneficial in shortening the early learning curve of single port surgery. However, performance with SPSP or SIL seems to be significantly less intuitive than SL. Additionally, after the 4-week training-period a performance gap to SL remained when a SPSP- or SIL-approach was used. 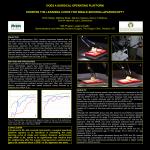