METHODS AND PROCEDURES – A three-arm prospective randomized trial was performed to compare the effect of training utilizing a 3D camera against a conventional two-dimensional (2D) camera on pre and post training test scores. 47 laparoscopy-naïve medical students were tested on 3 validated tasks (ring transfer, precision cutting and intracorporeal suturing) from the Fundamentals of Laparoscopic Surgery (FLS) task set. A total score aggregated time taken with an added time penalty for failure to complete the task and for precision errors. Testing and training were performed using the same modality in two of the arms (either in 3D or 2D). Participants in the third arm were tested in 2D but completed the training in 3D (2D/3D).

RESULTS – Across all three arms, training significantly improved test scores in all three tasks (p<0.001). Analysis of variance showed a significant difference between the arms for post-training test score (p=0.007) and percentage improvement (p<0.001) in the precision cutting task only. Post hoc analysis with Bonferroni correction showed the superiority of the 3D arm over the others (3D > 2D > 2D/3D). This trend was also seen in the other 2 tasks but did not reach statistical significance.

CONCLUSION – 3D laparoscopy improved acquisition of skills in simulated laparoscopic tasks in novices in one of the three tasks. However, differing modalities during testing and training may lead to poorer improvement among novices. This should be taken in consideration when 3D laparoscopy systems are employed in surgical education in novices. 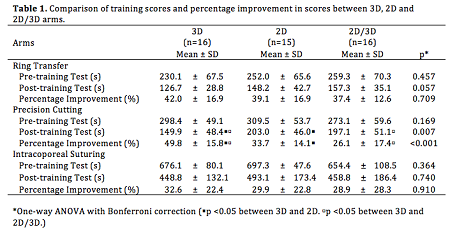