INTRODUCTION: This study sought to determine the rate and accuracy of documentation of the Critical View of Safety (CVS) during laparoscopic cholecystectomy (LC) within one hospital system. Despite the goal of CVS to prevent biliary injury, studies suggest that documentation of surgical technique may be incomplete or inaccurate.

METHODS: Within a 4-hospital system, 500 cases between 2009 and 2015 were randomly selected and retrospectively reviewed, and preoperative, intraoperative, and postoperative data were collected. Successful documentation of CVS was defined in two ways: “stated” if the operative report included a statement that the critical view was achieved, and “described” if the description of the procedure was consistent with the definition by Strasberg and SAGES’ Safe Cholecystectomy Program: 1. Calot’s triangle cleared, 2. lower third of the gallbladder separated to expose the liver bed, 3. only two structures seen entering the gallbladder, with the liver bed visible, before any structure was divided. Predictors of successful documentation of CVS were determined using multivariable logistic regression models. Attending surgeon (n=24) was an independent predictor of both stated and correctly described CVS. 6 patients (1.2%) had a bile duct injury; 8 (1.6%) had a surgical site infection; and 1 (0.2%) had an incisional hernia.

CONCLUSIONS: In this institution, the Critical View of Safety is not consistently utilized in LC. The correlation of abnormal anatomy with both CVS documentation categories could indicate that surgeons who document CVS prefer notes with a higher level of detail; this is also suggested by more detailed description of dissection methods, regardless of consistency with correct CVS technique. Documenting CVS displays an awareness of the method, but 18.4% of these surgeons do not describe dissection consistent with the correct technique. Although surgeon is an independent predictor of both CVS documentation and correct description, neither category correlates with whether or not the surgeon has completed a minimally invasive surgery fellowship.

There is no difference in outcomes for either group (operative time excepted), suggesting that CVS was not a factor in preventing bile duct injury. However, this is moderated by the low number of charts where CVS was correctly obtained and the rarity of BDI. The data also suggest that obtaining what the surgeon believes to be a critical view may preclude converting the case to open, which is concerning if the CVS was not correctly obtained. These findings have implications for both resident training and continuing education on safe laparoscopic cholecystectomy. 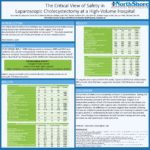