Diffusion of Robotic-Assisted Laparoscopic Technology from 2008-2013: A National Study

Introduction: We seek to examine the temporal trend of robotic-assisted laparoscopic technology prevalence and outcomes across specialties from 2008 to 2013. Initial population-based studies since the robotic-assistance ICD-9 code became available in 2008 demonstrated equivalent outcomes between laparoscopic procedures with and without robotic-assistance. With the availability of subsequent years of data, we employ temporal trend analyses to examine the impact of temporal elapse and diffusion of technology on outcomes.

Methods: A cross-sectional study using Nationwide Inpatient Sample from 2008 to 2013 was performed, identifying the 90% most commonly performed elective robotic-assisted procedures and their conventional laparoscopic counterparts. Orthopedic and otolaryngologic cases were excluded. Modified Wilcoxon rank-sum test was used to examine for trend significance. Regression models were constructed to examine association between year of operation and outcomes, including mortality, length of stay (LOS) and cost, among robotic-assisted cases.

Results: From 2008 to 2013, a total of 4,499,168 laparoscopic procedures were performed across the nation, 13.22% of which were with robotic-assistance. Its prevalence has increased significantly from 6.80% to 17.28% (p-trend<0.001). Specialties utilizing robotic-assistance during laparoscopic procedures most commonly were urology (34.13%) and obstetrics/gynecology (10.13%), while specialties with the most rapid growth in robotic usage were colorectal surgery (from 0.36% to 8.10%) and thoracic surgery (from 0.43% to 8.83%)(both p-trend<0.001). The usage of robotic-assisted technology by large-bedsize hospitals dropped from 78.96% to 64.25%, signifying a diffusion of technology to smaller hospitals (p-trend<0.001). After adjusting for preoperative patient and hospital characteristics, there was no significant association between year of operation and mortality (p=0.511) or LOS (p=0.396) among robotic-assisted laparoscopic surgeries over the study period. This finding remained consistent after stratification for hospital bedsize. However, there was a small but significant increase in cost per admission of $344.23 (p=0.001; 95% CI 143.12-545.33) per year for robotic-assisted procedures after adjustment for inflation.

Conclusions: Robotic-assisted laparoscopic procedures have undergone rapid growths in prevalence and diffusion to different levels of hospitals. However, we were not able to demonstrate a corresponding improval in outcomes such as mortality and LOS, although a gradual increase in cost over the six-year study period was found. 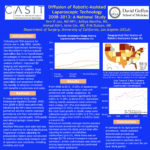