Patients and methods: Forty-six patients between November 2009 and June 2016 were included, 18 had ABO incompatible kidney transplantation, 12 had ITP, 6 had splenic tumors, 4 had splenic malignant lymphoma, 3 had splenomegaly and hypersplenism, 2 had splenic artery aneurysm, and one had hereditary spherocytosis. Operative factors and post-operative complications in the two groups were compared.

Conclusions: In selected patients, SILS is safe and feasible. We should not hesitate to place additional port for safe operation, as operational difficulty could not be predicted preoperatively. 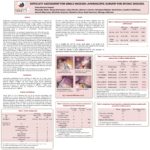