Natural orifice transluminal endoscopic surgery (NOTES) is a new surgical method with many promising benefits. Instead of creating a direct incision on a human body, NOTES uses a natural orifice of human, such as mouth, vagina or anus. Thus, a scar-less surgery can be achieved. Furthermore, it leads to less pain, shorter hospital stay, a faster recovery, less complications and infection and less stress. However, the applications of NOTES have been greatly limited as conventional tools cannot offer rigidity required for NOTES. we developed a novel semi-automatic snake robot for NOTES. The robot can be seen as the combination of conventional endoscope and a snake like robot. It consists of 12 active joints, which allows the operator to control the robot into any desired shape. On the other hand, the robot is semi-automatic, as it is held and inserted into a body by an operator, just like a conventional endoscope. A control system including a depth-tracking gate and a master device is assembled, while a control algorithm based on jacobian and follow-the-leader is prepared to control the robot. To evaluate the feasibility of the robot, a cadaver test was conducted with a prototype robot. The robot is to perform the navigation of the peritoneal cavity on two human cadavers through the anus. And more development with another robotics, we developed a snake-mechanism for NOTES, which employs the characteristics of a movable pulley. To insert the robotic mechanism through a natural orifice, it should be fabricated in the form of a small mechanism. For this reason, many surgical instruments are developed with a snake-mechanism as the endoscope. However, conventional snake-mechanisms have disadvantages including limited operating force and motion range. It is also difficult to expand the degree-of-freedom (DOF) due to these limitations. Therefore, we suggest the novel concept of a snake-mechanism in order to increase the operating and supporting force as well as the motion range for NOTES. Ultimately, we designed an advanced type of active-overtube, which provides passage for the flexible endoscope and device with enough force to perform surgery. Many kinds of treatment devices can be used through the three channels in the overtube. Additionally, all of the active joints of the overtube can be independently controlled. It is manually inserted and retracted, while its shape is automatically controlled using an algorithm for avoiding obstacles such as internal organs. Finally, we will show that the suggested mechanism is a good alternative for NOTES through simulations and prototypes. We expect that this new robotic tool can replace conventional tools in the future. 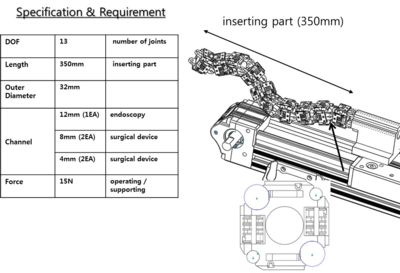 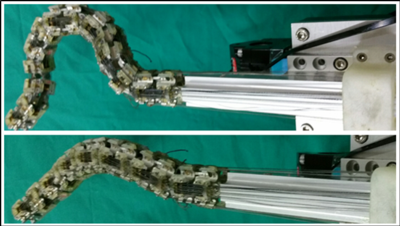 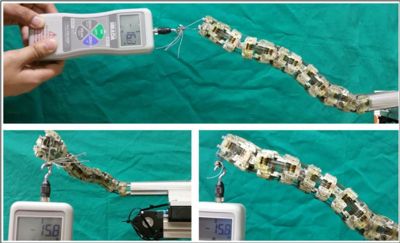