Introduction: Our objective was to create a low-cost, high-fidelity laparoscopic tool tracking system that would be incorporated into our previously developed Pediatric Laparoscopic Surgery (PLS) simulator. In an effort to encourage dissemination of the simulator and this system, costs were kept as low as possible. In this vein, off-the-shelf components were used whenever possible, and the tracking system was designed to function with standard pediatric Minimal Access Surgery (MAS) instruments (Ø 3mm). In order to achieve the high fidelity required, the demand on the system was an ability to measure a movement of 0.1mm in any direction, and a rotation of 1.0°. Fidelity of the visuals was also sought, requiring high definition video with little to no lag. Additional requirements were that the system be: 1) unobtrusive to the trainee (no noticeable strain/friction on the instruments); and 2) small enough not to limit the range of motion in the workspace.

Methods: Our system makes use of off-the-shelf electronics that are extensively used in consumer grade electronic devices; this ensures that they are rigorously tested, very robust, incredibly small and quite inexpensive. Our device makes use of an optical sensor commonly found in computer mice to detect two of the motion analysis parameters (roll and surge).  It also employs an accelerometer that is commonly found in cellular phones to detect the other two motion analysis parameters (pitch and yaw). We combined these two sensors onto a small printed circuit board and mounted it to a custom 3D printed MIS port. The sensors are then connected to a low-cost, open-source microprocessor which combines the data from each of the ports and passes it off to a standard laptop.

Results: Our system is able to detect surge motions as small as 0.012mm, roll motions of 0.48° (Ø 3mm) and 0.29° (Ø 5mm), and pitch and yaw motions of 0.1°. This equates to roughly 0.35mm in any direction when the tool is fully inserted into the port.  Resolution improves as the tool is retracted from the port.

Conclusion: We successfully designed, constructed and tested a low-cost, high-resolution laparoscopic tool tracking system. We have subsequently used the device in several studies on motion analysis, the results of which have been presented in several journal articles and conference presentations (additional results have been accepted to be presented at SAGES 2014). Part of the mission of our institution is “Engaging in knowledge translation and sharing our expertise globally”; as such, we will be publishing a paper with all the technical details of the system, and will release both the hardware and software components as open source. We hope that this will both improve the system and keep costs as low as possible for use in developing markets/countries. 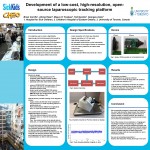