Background: In recent years, various studies have firmly established simulation training to be superior to traditional training methods, however it is yet to be fully incorporated into the surgical residency training in outside of North America. In Japan, distribution residents in wider variety of hospital, lack of finance and time for training has limited incorporation of simulation into residency training. There is a need for cost effective systematic training system for novice surgeons. We had previously developed and validated the TAPP checklist, to evaluate the recorded performance of transabdominal preperitoneal (TAPP) repair and developed an educational system which included the didactic materials based on the TAPP checklist and incorporated remote evaluation and feedback system.

Objective: To evaluate the educational impact of the TAPP education system on novice surgeons.

Method: Residents and surgeons from participating hospitals, who had performed 0 or 1 TAPP procedure were recruited for this study from April 2015 to March 2016. The participants were randomly assigned to Intervention Group (IG) who trained using this new educational tool and Control Group (CG) who trained using the conventional system. They were required to send the surgical videos of their TAPP cases. These videos were rated by blinded raters. All the participants performed their first case before randomization as control. The participants scoring more than 20 (full marks 24) in their first case were excluded from the study. IG then received the Educational tools and ratings and feedback from their surgery. They were also encouraged to practice intracorporeal suturing in the drybox. They were allowed to perform further cases after they met the predetermined operator criteria. The improvement of the TAPP checklist scores of both groups were compared from case 1 to 3. We also compared their scores of their 3rd case. 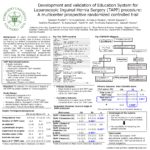