AIM The goals of this project were to develop a surgical model to assess buttressed and non-buttressed staple lines in the abdomen of a canine and utilize the model to test two buttress materials (BM).

METHODS The model was developed in stages utilizing acute surgical planning and a pilot chronic survival study. Surgically, the procedure for acute, pilot, and pivotal studies was similar to a Billroth II with a partial resection of the stomach along with a jeju-jejunostomy. Figure 1 illustrates the various locations of the staple lines. In total, eight individual staple lines were created.

In the pilot study, an omentectomy was performed to assess organ-to-organ abdominal adhesions; however, for the pivotal study the omentum was left intact to create a more clinically relevant model. Eight animals (n=16 staple lines per material) received surgery during the pilot study and 12 animals (n=40 staple lines per material) received surgery during the pivotal study. Intra-operatively, each anastomosis was qualitatively assessed for leak and patency by advancing intraluminal fluids against the anastomosis. Post surgically, all animals were observed for abnormal clinical signs, and food intake was closely monitored. Post mortem examination included a gross assessment of the abdomen, the extent, length and maturity of adhesions to each staple line, and length and depth of abrasions of buttress material to surrounding tissues. Ordinal scales were used to score adhesions and abrasions.  Buttress adhesion scores from the pilot study were used to power the pivotal study, with statistical comparisons conducted using a Kruskal-Wallis (α=0.05).

RESULTS The surgical procedure was well tolerated by all animals, with no post-operative complications observed. No intraoperative leaks from the staple lines were observed.  All animals returned to full feed rations within 3 to 5 days following surgery. Total body weight loss ranged from 4% to 13.4%. Gross observation of the abdomen at necropsy showed no indication of leak or peritonitis. For the pilot study, extensive adhesions (involvement of more than one organ) were observed for buttressed staple lines which was significantly different from non-buttress staple lines (p=0.0294  BM1 1 and p=0.00003 BM 2). The maturity of the adhesions were such that blunt dissection was required for complete staple line isolation. For the pivotal study, in which the omentum was left intact, the adhesion extent for the buttressed lines was found to be no different from non-buttressed staple lines (p=1.000).  No abrasions were observed with either buttress material or non-buttressed staple lines in either study.

CONCLUSIONS This surgical model enabled successful assessment of the performance of buttress staple lines in the abdomen of a canine. Differences in results between the pilot and pivotal study for the extent of adhesions to staple lines, appeared to be influenced by inclusion of the omentum. In all cases, omental adhesions were considered to be normal and not of clinical significance.  Finally, no signs of abrasions to adjacent organs were observed during either study, indicating that limited relative movement of abdominal organs may limit the utility of this model for investigating staple line abrasions. 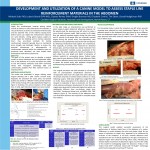