Detection of occult hernias during laparoscopic inguinal hernia repair: A prospective study in an Asian Cohort

Background: Laparoscopy by offering magnification and better vision provides us the opportunity for clear visualization of the myopectineal orifice. This gives the advantage to visualize presence of occult hernia. The aim of our study was to assess the potential of the laparoscopic approach for inguinal hernia repair in detecting occult hernias in an Asian population.

Results: A total of 443 patients underwent laparoscopic inguinal hernia repair. This included 202 unilateral and 231 bilateral cases, with total of 664 groins hernias. Indirect hernias were the most common, followed by direct and then femoral hernias. There were 420 male and 23 female patients. In all 80 occult hernias were found: 1 spigelian hernia, 20 obturator hernias and 59 femoral hernias. 5 patients were converted to open repair due to failure to progress during surgery and difficult dissection. No major intra-operative complication was noted apart from one case of ileal perforation which was diagnosed 5 days later. Injury to inferior epigastric artery was noticed in 3 cases managed intra-operatively. 53 patients developed seroma, most were managed conservatively except 3 cases who needed aspiration and 1 patient excision. Peri-port bruising was noticed in 21 patients and 14 patients had hematoma all managed conservatively. 7 off these patients were on aspirin, clopidogrel or warfarin pre-operatively. Superficial wound infection documented in 9 patients. 3 patients had postoperative urinary retention. Only one patient developed chronic groin pain and is on medical management. No recurrence was documented till date.

Conclusions: The laparoscopic inguinal hernia repair by providing better vision and magnification gives us an opportunity to detect unexpected or occult hernias which can be repaired during the same setting and thereby reducing the chance of recurrence and possible need for second surgery. 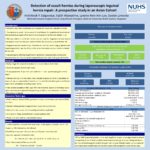