Background: Increased suicidal tendencies among cancer patients have been well documented. To date there has been no specific examination of suicide rates and clinical and demographic factors associated with suicide in patients with gastric cancer. This retrospective review examines the incidence of suicide and associated demographic and clinical factors in patients with gastric cancer from 1973 to 2013.

Methods: The Surveillance, Epidemiology, and End Results (SEER) Database of the National Cancer Institute was queried to identify patients with gastric cancer. The study includes mortality and demographic data from 1973 to 2013. Comparison data with the United States population was derived from the Centers for Disease Control and Prevention’s National Center for Injury Prevention and Control using the Web-based Injury Statistics Query and Reporting System. Standardized Mortality Rations (SMRs) and their 95% confidence intervals (95% CIs) were calculated and multivariable logistic regression models generated odds ratios (ORs) for the identification of factors associated with suicide in gastric cancer.

Results: Of 121,820 patient deaths 210 (0.17%) were due to suicide. 86% of patients committing suicide were Male and 83% of suicides occurred in Whites. The odds of Males committing suicide were 4.8 times greater than Females (95% CI: 3.1 –7.2) and the odds of Whites committing suicide were 1.8 times greater than Non-Whites (95% CI: 1.26 – 2.6). There was no relationship between suicide and income, mode of radiation therapy, histology, or role of surgical intervention. While 38% of suicides occurred in patients presenting with Stage IV disease, the relationship between stage at presentation and suicide was not statistically significant. Patients with gastric cancer were 3.21 times more likely to commit suicide than the general population (95% CI: 2.80 – 3.67). Males and females were both significantly more likely than the gender matched population to commit suicide. With respect to age, patients < 39 years and > 80 years with gastric cancer significantly more likely than the age-matched population to commit suicide. Conclusion: Suicide represents a potentially preventable cause of death in patients with cancer. Identification of evidence-based risk factors associated with suicide among patients with gastric cancer is an important step in the development of screening of a screening tool and development of an interventional strategy. There were significant differences with respect to race and gender in patients with gastric cancer. Whites and Males were significantly more likely to commit suicide than females and Non-Whites as were patients at the extremes of age. 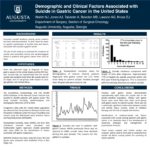