Case Report: A 35 year old female with history of laparoscopic gastric bypass 8 years ago presented to an outside hospital with 4 days of cramping abdominal pain, nausea and vomiting. She reports to have a history of malrotation found incidentally during her gastric bypass. Imaging at that time demonstrated an ovarian cyst and free fluid on US and CT. She represented to the ER the following day with worsening abdominal pain and nausea and repeat CT demonstrates a whirl-sign  and concern for small bowel obstruction. The concern for midgut volvulus was high. She was therefore transferred to our facility as the tertiary referral center in the area.

Upon presentation she continued to report cramping lower abdominal pain. She was taken urgently to the operating room due to concern for mid gut volvulus. Diagnostic laparoscopy was performed with attempted reduction of the volvulus. Midgut volvulus was confirmed and after brief attempt to reduce the volvulus laparoscopically, the procedure was converted to open. The midgut volvulus was reduced and LADDs procedure performed. . The entire small bowel, which initially appeared dusky and congested, became pink and healthy after the reduction of the volvulus. A gastrostomy tube was placed in her excluded stomach for decompression. Postoperative recovery was slow but uneventful. She eventually had return of bowel function and was tolerating a regular diet. She was discharged home on post-operative day 13.

Discussion: In this case the patient presented 8 years after her laparoscopic gastric bypass. Her presentation and imaging were consistent with midgut volvulus. Opinions on the decision to proceed with LADDs procedure during the gastric bypass versus proceeding with the gastric bypass alone differ amongst surgeons. We also believe that the patient be informed of the diagnosis and after maximal weight loss has occurred that an attempt be made to perform a laparoscopic LADD procedure. We believe that obesity might be protective in these patients and rapid weight loss from a gastric bypass makes the small bowel mesentery thinner and more likely to cause volvulus. As was demonstrated in the case above once a midgut volvulus has occurred it becomes very difficult to laparosocpically correct it and in some cases due to delayed diagnosis patients have lost their entire small bowel. 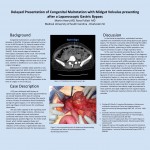