INTRODUCTION
Incarceration and obstruction of an intra-thoracic stomach are complications of paraesophageal hernias (PEH). Emergent surgery for PEH is considered to have worse outcomes when compared to elective repair. Gastric decompression and resuscitation are important elements of preoperative management of acutely obstructed PEH. The optimal time for surgical repair after decompression is unknown. We hypothesized that in obstructed patients, early surgery may not improve outcomes compared to initial non-operative management followed by same admission surgery.
METHODS
The National Surgical Quality Improvement Project (NSQIP) database was queried by current procedural terminology (CPT) codes for PEH repair from 2005- 2009; we included only patients with a post-operative diagnosis code for obstructed PEH. Patients were divided into having surgery within 1 day of admission (EARLY) or more than 1 day (DELAYED). Primary outcomes were rates of mortality & any morbidity. Secondary outcomes were pulmonary, wound, and thromboembolic (VTE) complications. Multivariable analysis controlled for age and cardio-pulmonary co-morbidities
RESULTS
There were 224 patients with obstruction and PEH, of these 149 (67%) underwent surgery within 1 day (EARLY) and 75 (33%) had surgery after 1 day (DELAYED), mean 3.6 days (standard deviation 2.8 days). Patients were a median of 70.5 years old and 63% were female. Repairs were 89% trans-abdominal, 9% included a fundoplication, and 18% a gastrostomy. The EARLY and DELAYED patients experienced similar overall morbidity 23% v. 31% (p=0.2) and mortality 5.4% v. 4.0% (p=0.7). There were no differences in post-operative pulmonary, wound, or VTE complications. Post-operative sepsis was less common (2.7% v. 13%, p=0.002) and length of stay was shorter (5 v. 11 days, p<0.001) for EARLY patients compared to INTERVAL patients. On adjusted analysis, patients in the EARLY group had an 80% reduction in odds of post-operative sepsis (95% CI 0.05-0.6, p=0.005). Odds of overall or other morbidity, or mortality were statistically similar between groups.
CONCLUSIONS
Increased morbidity and mortality has been well documented for patients undergoing emergency surgery for PEH repair compared to elective repair. Presumably, patients requiring emergency surgery for PEH have diseased complicated by strangulation, perforation, bleeding or sepsis. In our analysis, patients with an obstructed PEH had less postoperative sepsis and fewer days in the hospital if surgery was performed within the 1st hospital day. There was no difference in mortality or other major morbidities. While deferring surgery for resuscitation permits patient optimization, prolonged delay in surgical repair may result in worse patient outcomes. 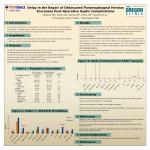