CT-guided Vs. Laparoscopic Radiofreqnecy Ablation (rfa): A Comparison of Morbidity and Hospital Cost

Background: CT-guided radiofrequency ablation (CT-RFA) is presumed to be less morbid and less costly than laparoscopic RFA (L-RFA). CT-RFA, however, has a higher treatment failure rate than L-RFA. This analysis looks at the 30-day morbidity and financial data for CT-RFA versus L-RFA for hepatocellular cancer (HCC) and colorectal liver metastases (CRLM).

Methods: All patients with the diagnosis of CRLM or HCC who underwent CT-RFA or L-RFA at our institution between 2002-2008, were reviewed retrospectively. Demographics, risk stratification and procedural data were analyzed. Hospital financial data was queried for total cost, reimbursement and itemized departmental charges. Patients with CRLM or HCC were evaluated separately. 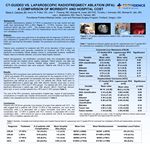