Introduction: Vertical sleeve gastrectomy is the most commonly performed bariatric operation. Advantages include a reduced risk of micronutrient deficiency, as well as the absence of anastomosis creation. Despite its advantages, complications such as leaks, bleeding and stricture can occur. The purpose of this report is to determine whether a standard protocol without expensive adjuncts such as buttress material, specimen retrieval bags and extended anticoagulation regimens, can promote early discharge without increasing complications, readmissions or compromising weight loss.

Methods: A retrospective review of laparoscopic sleeve gastrectomies performed by a single surgeon at a community hospital between January 2015 and September 2016 was performed. Preoperative education was standardized amongst patients. A single anesthesiologist performed 96% of the cases. A 4-trocar technique with a Nathanson retractor was employed, and the largest trocar was placed within the umbilicus or lower midline. A 36 French bougie was placed along the lesser curvature, and stapling was performed in a curvilinear fashion. The initial fire load occurred 3 cm from the pylorus and was angled towards the left shoulder, the second fire was neutral, and subsequent staple loads were articulated at a 15 degree angle until reaching the gastroesophageal junction. The staple line was oversewn continuously, reapproximating the omentum to the greater curvature. Hiatal hernias, if present, were repaired. No intraoperative dye test or endoscopy was performed. Lovenox and venodynes were used for deep venous thrombosis prophylaxis; no outpatient anticoagulation was prescribed. A clear liquid diet was started immediately post-operatively.

Results: One-hundred-sixty-five laparoscopic sleeve gastrectomies were performed between January 2015 and September 2016. The 30-day readmission rate was 0 percent. There was 1 epigastric bleed that required operative intervention, but there were no leaks or strictures. In the 2015 cohort, the percent excess body mass index loss was 66% at 1 year compared the national average of 59% (MBSQIP); the 2016 1 year follow-up data is pending.

Conclusion: The data reported is reflective of a multi-factorial process that involves a consistent, patient oriented staff, standardization of technique, and aggressive return to activity post-operatively. Expensive adjuncts such as buttress material and outpatient anticoagulation are generally not necessary to achieve favorable outcomes. 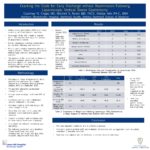