Introduction: Compared with open splenectomy (OS), laparoscopic splenectomy (LS) is increasingly seen as a superior technique for liver cirrhotic patients with massive splenomegaly. On the other hand, surgeons need a steep learning curve period to be adept in laparoscopic surgeries. During the early stage of the learning curve, longer operation time, greater consumption of disposable equipment and higher rate of conversions may contribute to the higher hospital charges. The aim of this study is to compare the hospital resource consumption connected to different laparoscopic and open methods of splenectomy for cirrhotic patients with massive splenomegaly at different learning curve periods.

Methods and procedures: An institutional database was reviewed to identify liver cirrhotic patients with massive splenomegaly who underwent splenectomy from 2008 to 2011. All patients receiving LS (n=45) were divided into Group 1 (n=24), in which patients’ LS were conducted during the early stage of the learning curve, and Group 2 (n=21), in which patients were treated with LS after the learning curve phase was achieved. An additional 24 patients underwent OS from 2008 to 2011 were included as Group 3. In addition to clinical data and outcomes, a cost analysis including overall, operating theatre, anesthesia, and wards costs was performed.

Conclusion: In an experienced surgeon’s hand, LS, with better surgical outcomes and equivalent overall cost, is a superior choice for liver cirrhotic patients with massive splenomegaly compared with OS. 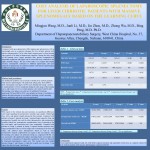