Introduction: Limited literature has addressed the physiologic effects and in particular muscle responses when training on a virtual reality (VR) simulator. With VR training simulators gaining much attention as an alternative method to help surgeons to improve their laparoscopic skills, we set out to examine muscle physiology in a VR training environment. This study specifically looked at muscle effort and fatigue of the upper extremity while performing training tasks for fundamental surgical skills in both a Fundamentals of Laparoscopic Surgery (FLS) training-box and a virtual reality (VR) trainer. We wanted to know if a VR simulator could provide a similar physiologic experience as the FLS training-box. Our hypothesis was that muscle effort and fatigue would be similar regardless of the training environment.

Methods and Procedures: Ten inexperienced medical students (all right-hand dominant) were recruited. They performed two FLS tasks: peg transfer and precision cutting, and a third needle passing task in both a real world FLS training-box environment and the VR simulated training environment. The subjects’ electromyography (EMG) activities were measured in proximal (upper trapezius and anterior deltoid) and distal muscles (extensor digitorum and flexor carpi radialis) of the upper extremity, which allowed for the analysis of the muscle effort and fatigue experienced while performing a specific task. Statistics were analyzed using paired t-test on SPSS software (IBM Corp., Armonk, NY, USA).

Results: Muscle efforts in proximal muscles were significantly (p<0.05) higher than in distal muscles for both precision cutting and peg transfer tasks performed in the FLS training-box. This is most likely due to the need to stabilize the upper extremity when performing fine motor movements. The VR trainer showed significant differences (p<0.05) in muscle efforts between proximal and distal muscles in all tasks. This difference could be attributed to the VR controllers, which has no constraint from trocars. More degrees of freedom are allowed for participants to complete all tasks in the VR trainer. When comparing muscle efforts between training environments, the proximal and distal muscle efforts required to complete the tasks differed significantly (p<0.05) only in the peg transfer task. Muscle fatigue levels for all three tasks showed no significant differences (p>0.05) when comparing training environments.

Conclusions: Comparisons in EMG results between training environments shows promise as to how the VR training system can realistically affect the muscle physiology of the individual training. With similar muscle effort and fatigue levels demonstrated in both environments, the VR trainer could provide meaningful physiological value to the surgeon’s training in laparoscopic practice. 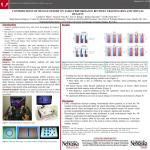