BACKGROUND
Robotic-assisted surgery is becoming more common in the field of colon and rectal surgery. While several advantages such as dexterity and visualization have been reported for the use of the robot, the effects of patient obesity on the outcomes of these procedures have yet to be reported. Obesity has been shown to have a negative impact on outcomes in laparoscopic surgery, with increased rates such as wound infections (20%) and conversions to open (30%) noted. Our aim was to examine the complication rate following robotic-assisted colorectal surgeries in obese patients.

METHODS:
We conducted a retrospective review of the first 144 consecutive colon and rectal procedures performed by a single surgeon at our institution using the da Vinci robotic system between October 2009 and July 2012. Of these patients, thirty-three had a BMI > 30 kg/m² at the time of surgery. Intraoperative and postoperative complications were the primary endpoint; however, other perioperative data such operative time and length of hospital stay were also examined.

RESULTS:
Thirty-three procedures were performed: including abdominoperineal resection, low anterior resection, rectopexy and right/left/sigmoid/total colectomy. The mean age at surgery was 57.3 years, and mean BMI at surgery was 36.6 kg/m². Preoperative indications included polyps, diverticular disease and cancer. The mean operative time was 255 (135-470) min; the median length of stay was 5 (1-41) days. Of the 33 patients, 6 had major postoperative complications, for a rate of 18.2%. These included anastomotic bleed (1), myocardial infarction (1), reoperation to evacuate hematoma (1), and intra-abdominal abscess (3). Minor complications, which include 5 wound infections, occurred for a rate of 15.2%. Two procedures were converted to open, for an overall conversion rate of 6%.

CONCLUSION:
While robotic-assisted surgery has been shown to be safe and effective in the field of colon and rectal surgery, it can be technically challenging; some of these challenges are amplified in the obese patient. The operative time and length of hospital stay were not significantly longer than those described in the laparoscopic literature, and the conversion rate to an open procedure was much lower than stated. Complication rates seem to be similar. Further analysis is necessary to determine the safety and efficacy of robotic-assisted colorectal surgery in the obese population. 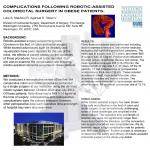