Methods and procedures: All patients with uncomplicated cholecystitis undergoing elective laparoscopic cholecystectomy in the Department of General Surgery, Sri Ramachandra University, were included in the study. This study was conducted on 220 patients undergoing surgery between 2014-2016. All patients were followed up for a period of 3 months. They were randomized into Antibiotic group and Non Antibiotic group. 108 patients received no antibiotics whilst the other 112 patients received 3 or more doses of antibiotics. All patients underwent traditional four port laparoscopic cholecystectomy. The gall bladder specimen was removed through the 10mm epigastric port without using a Endo-bag in all patients. The parameters assessed were port site infection and post-op pyrexia.

Results: It was noted that there was no statistically significant difference in port site infection and post-op pyrexia in the no antibiotic group when compared to the group which received antibiotics.

Conclusion: This study shows us that in cases of elective laparoscopic cholecystectomy, antibiotics do not play a major role in controlling post-operative infections. By avoiding antibiotics we are reducing not only the cost, but also the risk of antibiotic resistance. 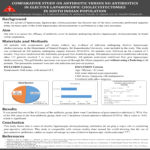