Introduction: Buttressing material is commonly used to minimize staple line bleeding after gastric sleeve resection. We have been using the Goreâ Seamguardâ staple line reinforcement (67% PGA and 33% TMC = Maxon) together with Covidiens tri-stapler, purple cartridge. The Seamguard needs to be manually loaded on to each cartridge. During 2015 a new Covidien cartridge with a preloaded buttressing material (100% PGA) was introduced in Sweden. The PGA has a more rapid degradation, 15 weeks, compared with 6-7 months for PGA-TMC. Previous studies indicate that rapid degradation induces more local inflammation. In order to shorten operation time, we changed our practice and started to use the preloaded cartridges. After 6 months we evaluated the clinical outcomes and complication rates comparing the two materials.

Results: The groups did not differ concerning age, BMI or gender. Number of cartridges used did not differ. Mean operating was 46 min for the preloaded cartridges and 48 min for the Seamguard buttressing, showing no significant difference. Hospital stay was significantly longer for the patients operated with the preloaded cartridges, compared with Seamguard (1.7 days vs 1,3 range) (p= 0.022). The longer hospital stay was due to more postoperative pain, nausea and delayed oral intake. No patients had staple line bleedings. In the preloaded group 4/28 patients returned to the hospital with leaks at the angle of Hiss with delayed onset, one patient after 1 week, one after 1 month, one after 3 months and one after 6 months. In the Seamguard group 2/42 patients returned with leaks, one acute leak after 2 days and one delayed after 3.5 months. (no significant difference in leak rate)

Conclusions: The faster degrading material (100% PGA) induces more acute inflammation which might result in immediate postoperative nausea and pain leading to longer hospital stay. There was also a tendency towards a higher incidence of delayed leakages in this group, which might be induced by the initial higher grade of inflammation and subsequent faster degradation. 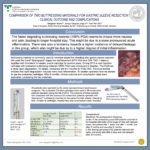