Aim and Background:
Laparoscopic sleeve gastrectomy (LSG) is becoming a very popular surgical technique in the management of morbid obesity. Staple line hemorrhage is the number one cause of bleeding in LSG and previous multicenter studies have proven that staple line reinforcement is an effective method in preventing this problem. The aim of the present study is to compare the efficacies of Tisseel® and Seamguard® application to reinforce the staple line during LSG.

Patients and Methods:
As a total 145 patient underwent LSG; all of which were performed by the same surgeon (leading author). 15 of these patients had their adjustable gastric band removed and therefore excluded from the study. Remaining 130 patients (24 Male) had a mean age of 39,9 (19-62 years) were included.
Results:
The mean body mass index was 48 (40-65)kg/m2. In 57 patients Tisseel® and in 73 patients Seamguard® was used. The mean operation time significantly lower in the Seamguard® group (46 min v.s. 60 min; p<0.05). The mean hospitalization time was 5.5 days. At the end of their hospitalization; a leak test was performed under X-ray control; before the drain removal. Mean drainage in the postoperative first 24 hours were not significantly different among Seamguard® and Tisseel® groups (131.1 mL v.s. 165.2 mL). As for the postoperative complications; postoperative gastric leak (1.6%) from the staple line developed in two patients which were both from the Tisseel® group. During the study period one patient developed staple line hemorrhage (0.8%) in whom Seamguard® had been used. The use of Seamguard® significantly increased the hospital costs which were 4 times higher than the Tisseel® group.

Conclusion and Discussion:
Reinforcing the staple line previously had been found to be an effective method to reduce staple line hemorrhage. As a result of the present study there were no significant difference between Tisseel® group and Seamguard® groups interms of hospitalization, complications and drainage volumes. On the other hand Seamguard® reduced operating time and application of Tisseel® reduced the hospital costs. These two reinforcement methods can both be safely used during sleeve gastrectomy. 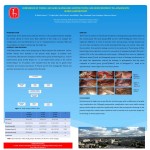