Introduction: To objectively evaluate and compare surgical trainee’s performances in laparoscopic intracorporeal suturing using 2D and 3D vision systems in terms of performance times, number of repetitions and errors on a box trainer.

Methods: 24 core surgical trainees randomised to 3D and 2D imaging systems performed laparoscopic intracorporeal suturing according to the validated fundamentals of laparoscopic surgery (FLS) curriculum until task proficiency is achieved. The trainees were swapped to the other vision system one week later in a cross-over design and repeated the same task. Wilcoxon signed-rank test was used to test the difference between the two groups.

Results: There was no statistical significant difference between the two groups in the total time to reach proficiency, however observationally there was a large difference between the 3D group compared to the 2D group (see table). Number of repetitions to reach proficiency and accuracy errors were significantly lower in the 3D group compared to 2D group. Total error scores were also lower in the 3D group compared to the 2D, which was borderline significant. All of the candidates reported tiredness by using the 3D system and only 33% in the 2D group. Forty per-cent of trainees experienced light headache and only ten per-cent of participant complained of dizziness after completing the task using the 3D system.

Conclusion: Three-dimensional vision allows for significant improvement in performance and error rates compared to the two-dimensional vision while performing complex laparoscopic skills such as intracorporeal suturing. Training in the 3D group was influenced by tiredness, headache and stereoscopic adaptation. 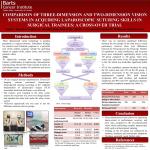