Method: Fifty-four patients randomly assigned to two groups; SILC and SLC. The surgical outcomes such as length of stay, complications and perioperative morbidity were analyzed. For evaluation of surgical stress preoperative and postoperative CRP values at 6 h and 24 h were measured. Postoperative pain was evaluated using a standard 10-point visual analogue scale (VAS). 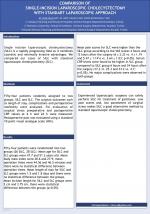