Comparison of Short-term and Long-term Outcomes of the Colon-lifting Method and Standard 5-ports Laparoscopic Colectomy for Colorectal Cancer: A Case-matched Control Study

BACKGROUND : A standard laparoscopic-assisted surgery for colorectal cancer is often performed with five ports. We developed the colon-lifting method (CLM) in 2000, and were able to perform the laparoscopic-assisted colectomy with total 3 or 4 ports by using CLM.
PURPOSE : To evaluate the utility of CLM, the outcomes of it were compared with standard five port laparoscopic-assisted surgery (5Ports) by a case-matched control study.
SURGICAL TECHNIQUE: A 1-0 suture thread is inserted into the abdominal cavity and passed through the separating line of the mesocolon. The colon was retracted to the frontal side by pulling the thread that was fixed at the abdominal wall by the forceps. Then, the nutritional artery was stretched in the mesocolon, lymph node dissection was easily performed. Because of fixing the thread to abdominal wall, the trocar can be saved. In 3 trocars, it is possible to operate by two surgeons.
METHODS: This single-center study examined short-term and long-term results of 204 patients who underwent laparoscopic resection with CLM, and 204 matched the patients that underwent with 5Ports from 2000 to 2009. The valuables were operative year, age (+10 years), American Society of Anesthesiologists (ASA) score (+1), tumor location (colon, rectum).
RESULTS: There was no difference in the characteristics of patients of both groups.
1) In short-term results, the operation time and the convert rate were lower than 5Ports group in the CLM group (CLM: 5Ports = 219min.: 251min, 1.5%: 9.8%, p<0.05). The morbidity (grade 2 or more) rates were almost equal (24.5%: 22.1%, N.S).
2) In short-term results, 5-year overall survival rates in CLM and 5Ports groups were 97.6 % vs. 95.9 % for stage I, 100 % vs. 100 % for stage II, and 88.7 % vs. 96.4 % for stage III. Corresponding 5-year disease-free survival rates were 95.5 % vs. 89.2 %, 93.8 % vs. 82.3 %, and 69.3 % vs. 70.6 %. Recurrence did not differ between groups.
CONCLUSION: In CLM for colorectal cancer, short-term and long-term outcomes were almost equal to the standard 5Ports. The CLM is a useful method for maintaining the stable operative field so as to perform safe operation. In addition, it is advantageous in that it reduces the number of required surgical staff and implement. 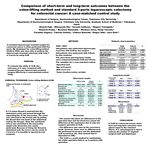