Comparison of Pain and Inflammatory Response Between Single Port and Laparoscopic Cholecystectomy – A Prospective Study.

Introduction: The aim of this study was to compare the perioperative and postoperative inflammatory response and severity of pain between single incision laparoscopic surgery (SILS) cholecystectomy and conventional laparoscopic cholecystectomy.
Methods and Procedures: Two groups of 20 patients were prospectively randomized to either conventional laparoscopic cholecystectomy (LC) or SILS cholecystectomy. Serum interleukin-6 (IL-6) levels were assayed prior to surgery and then 4-6 hours and 18-24 hours after the procedure. Serum C-reactive protein (CRP) levels were also assayed at 18-24 hours after surgery. Pain was measured at three points after surgery using the visual analogue scale (VAS) and the number of analgesic doses administered in the post-operative period was recorded during first 24h after the procedure. Student’s t-test and the Mann-Whitney test were used when appropriate. P values <0,05 were considered significant.
Results: The groups had equivalent BMI, age and comorbidity distribution. The peak of IL-6 levels occurred 4-6 hours after surgery and the median level was 8.9 pg/ml in the SILS group and 12.8 pg/ml in LC group (p=0.495). The median CRP level before discharge was 1.6 mg/dl in LC group and 1.9 mg/dl in SILS group (p=0.383). In addition, no difference in pain intensity according VAS measures or analgesic use was found between the two groups (p=0.723). The length of the surgical procedure was significantly longer in the SILS group (p<0.001). No intra operative complications occurred in any group.
Conclusion: SILS does not significantly reduce systemic inflammatory response, post-operative pain or analgesic use when compared to laparoscopic cholecystectomy. 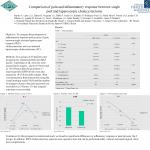