Methods: 44 patients suffering from T2DM were enrolled in this study in Beijing Shijitan Hospital during March 2012 to March 2016. The patients were divided into LRYGB group (n=24) or LSG group (n=20) based on the surgical procedure and the clinic data of two group were collected and compared.

Conclusions: This research concludes that LRYGB and LSG are safe and effective to treat the patients who suffered from type 2 diabetes. We recommend LSG as preferable choice of the surgical procedure considering easily being operated. 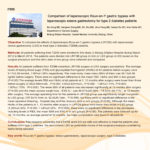