Comparison of Intracorporeal Versus Extracorporeal Anastomosis in Laparoscopic Hemicolectomy

INTRODUCTION: The aim of this study was to determine short-term outcomes of an intra- vs extra-corporeal anastomosis in laparoscopic hemicolectomy.
METHODS: Retrospective chart review of 105 consecutive patients who underwent laparoscopic hemicolectomy performed by a single surgeon from January 2006-August 2008. Pearson Chi-square and student’s t-test were used to test for significance.
RESULTS: There were 105 patients (males=47, females=58) with a mean age of 47.5 years who underwent laparoscopic colectomy (ileocolic resection=66, right=29, left=9, subtotal=1). Indications included inflammatory bowel disease=64, neoplasm=27, polyp=9, and other=7. There was no perioperative mortality. While there were more males in the extracorporeal group, patients in the two groups were otherwise demographically comparable. Mean results are shown in the following table:

CONCLUSION: In comparison to the extracorporeal technique, intracorporeal anastomosis produces superior results with a shorter length of stay, decreased postoperative narcotic use, faster return of bowel function and decreased morbidity. Further studies will be needed to verify our findings. 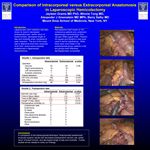