Purpose:
A new image-guided surgical system, with a computer-aided imaging-overlay system between the real-time laparoscopic view and a reconstructed 3D surgical model of the targeted anatomy, named augmented reality (AR), We compare imaging-assisted laparoscopic adrenalectomy (IALA) and conventional laparoscopic adrenalectomy (CLA).
Materials and Methods:
From January 2009 to Mar 2012, totally 19 cases with adrenal tumors were treated by laparoscopic adrenalectomy in our hospital. eight adrenalectomy by IALA, 11 adrenalectomy by CLA. Their medical records were analyzed, and the relevant literature was reviewed.
Results:
All procedures were successfully completed without conversion to open surgery. There were no perioperative complications. There was neither postoperative mortality nor morbidity at the time of discharge and during follow-up. However, the operative time were shorter in the IALA group (102.5 ± 12.8 min vs. 150.9 ± 46.3 min, p = 0.05).
Conclusion:
AR provided precisely intraoperative decision-making by extensive understanding of the 3D topography of the surgical target. It can decrease the learning curve and superior to the conventional approach. 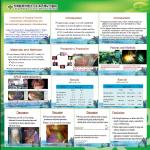