Methods: Distensibility was measured with EndoFLIP intraoperatively in patients undergoing POEM and LHM using balloon distension volumes of 30ml, 40ml, and 50ml. Separate measurements were taken after each operative step to evaluate each component’s specific effect on EGJ physiology. Both procedures were performed under general anesthesia with endotracheal intubation and paralysis. During POEM, measurements were taken after: 1) induction of anesthesia, intubation, and paralysis, 2) submucosal tunnel creation, and 3) myotomy. During LHM, after: 1) induction of anesthesia, intubation, and paralysis, 2) insufflation of pneumoperitoneum, 3) crural opening and hiatal dissection, 4) myotomy, 5) partial fundoplication, and 6) deinsufflation. 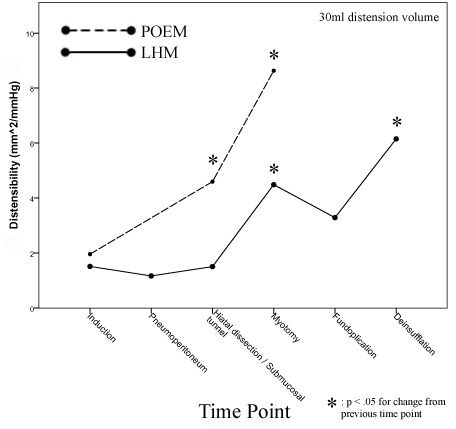