BACKGROUND: Gastrectomy with extraperigastric (D2) lymphnode dissection for advanced gastric cancer have been performed and recommended as the standard operation in Korea and Japan. Although laparoscopy gastrectomy is considered one of the minimally invasive surgeries, widespread use of this technique is limited because of the some technical difficulties. Robotic surgery was adopted to improve some technical disadvantage with laparoscopic surgery. Although there have been several reports of robotic gastrectomy, there is no reports to assess the surgical outcomes of robotic gastrectomy with D2 lymphnode dissection for advanced gastric cancer compared with those of laparoscopic gastrectomy.

Methods: Between July 2005 and Apr 2009, robotic and laparoscopic gastrectomy with D2 lymphnode dissection for advanced gastric cancer without combined operation was included as entry criteria. Within this period, 33 RG using the da Vinci Surgical System and 46 LG were consecutively performed in Yonsei University Severance Hospital, Seoul, Korea. All operation was performed by one surgeon. We evaluated clinicopathologic and surgical characteristics, operative outcomes, and postoperative morbidities and mortalities between the RG group and the LG group from a prospectively designed computer database. As statistical analysis, Chi-square and independent t-tests were used to compare those two groups. P value less than 0.05 were considered significant. 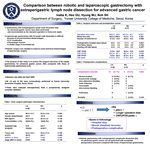