Single-site laparoscopy is recently developed and evolving technique in minimally invasive surgery. Severe physical and ergonomic constrains for the surgeon are often associated with this approach due to movement and access constrains of inserting multiple laparoscopic instruments together with the endoscope through a single access point. Difficulty in performing for laparoscopic intracorporeal suturing and knotting techniques can result which is a major limitation to popularity of single-site laparoscopy.

The authors designed this study, and collected data for it , at the 2012 SAGES Learning Center. Intracorporeal suturing and knotting techniques were compared using both conventional laparoscopic and single-site access approaches.

At the Suturing &VR Suturing Simulation Station of Learning Center the following instrumentation was used:the Szabo-Berci standard top training box, Szabo-Berci parrot and flamingo type needle holder and assistant instruments, 5mm- and 10mm -30 degree angled laparoscopes. After demonstration by one of the authors of a well prepared stich and square knot using a traditional laparoscopc access and the typical triangulating operating platform, participants attempted to perform the same technique. The performance times were measured.Following the first round evaluations, each paticipant performed the same task using a single-site access. The distance between the entry ports of working instruments was 18 cm at a typical traditional access, while it was only 4cm at the single-site setup.

Sixteen random visitors to the Suturing Station were involved in this study. Their mean age was 45.6 years ( 30-67 years).The average time for creating a stich and square knot differed dramatically between the two rounds. In the first round participants had an average performance time of 56.81±30.37 sec, while in the second round was125.12±79.54 sec ( p<0.003). 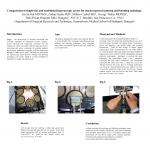