Objective:
Opportunities to acquire laparoscopic skills can be difficult and costly. Our aim was to look at the learning curve of skill acquisition using an ‘At-Home’ training device, an iPad (tablet) based trainer, and an ‘In-Lab’ laparoscopic stack and scope. The comparison of the tablet trainer would demonstrate the extent to which the results of it, correlate with the gold standard box trainer known to measure the same domains, this is called concurrent validation.

Technology & Method:
The tablet trainer is comprised of an iPad mounted on a cardboard stand. There are two openings in the stand which allow the laparoscopic instruments to pass through. The iPad screen acts as a monitor for the user. The box trainer is comprised of a plastic mannequin linked to the VISERA Pro video system (Olympus).
Medical students with no laparoscopic experience were eligible to participate. The students were emailed regarding the study. The participants were randomly allocated across the tablet trainer group and the box trainer group. The participants in both groups had to carry out three tasks on their allocated trainer. Task1 was ‘object transfer’, Task2 was ‘tissue cutting’ and Task3 was ‘surgical knot tying’. Task 1 was deemed successfully completed when three consecutive repetitions fulfilling the pre-established requirements, while Tasks 2 & 3 required only two successful repetitions. The domains measured were ‘time taken’ to complete each task, the ’Objective Structured Assessment of Technical Skills’ (OSATs) by two independent markers and an objective measure of the cutting accuracy in Task2 (diameter percentage out-lie).

Conclusion:
The study has shown that the tablet trainer could demonstrate better acquisition of the laparoscopic skills than the box trainer. This finding was unexpected and would require further work to ascertain the cause. Also, we could not demonstrate a p-value significant improvement in time to complete tasks. Time is not considered to be a good measure of skill (as demonstrated by improving OSATS scores) but one would still expect a significant improvement in the scores. More importantly however, both simulators proved useful at teaching a novice trainee basic laparoscopic skills. Through this study we have managed to establish concurrent validation of the tablet trainer and box trainer. 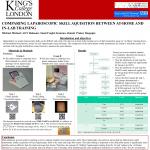