BACKGROUND: Bariatric surgery has been an acceptable treatment in morbid obese patient which demonstrated efficacy on weight loss and comorbidity resolution especially diabetes. The effect on diabetes control obviously occur within 3 months after surgery. Gastric bypass (LRYGB) is still the standard procedure and thought to has the major role in glucose homeostasis and diabetes control. Sleeve gastrectomy(LSG) is gaining the popularity as an option procedure in morbid obese patient with comparable outcome to gastric bypass in previous study. However there is still lack of data in Asia-pacific.

OBJECTIVE: To compare the remission rate of diabetes within 3 months after LSG and LRYGB surgery including the data of anti-hyperglycemic drug use, excess weight loss, and complication rate of both operations.

METHOD: A cohort study in morbid obese patients with type 2 diabetes (T2DM) who undergo LRYGB and LSG in King Chulalongkorn Memorial Hospital. We recruited all Thai patient with age between 15-60 years, BMI 32.5-60, history of T2DM at less 6 months but not more than 10 years. At 3 months after surgery, the remission rate, excessive weight loss, the reduction of anti-hyperglycemic drugs use, change of HbA1c and complication rate were collected.

CONCLUSION: The study shows that bypass surgery is significant effective than sleeve gastrectomy in reduce weight but could not demonstrate significant difference in diabetes control in Thai patients. However this report shows that both procedures are feasible and have high success rate in glycemic control. 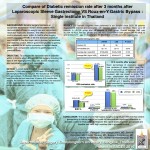