Background: Rectovaginal fistula (RVF) after low anterior resection for rectal cancer is umcommon and few studies have been reported. The aim of this study was to compare RVF and conventional anastomotic leakage(CL), and to evaluate the success rates of each treatment for RVF.

Methods: All female patients who underwent laparoscopic or robotic low anterior resection with colorectal anastomosis or coloanal anastomosis between January 2003 and April 2015 (n=630) were retrospectively analyzed. Among them 36 patients experienced anastomotic leakages. Subjects were divided into two groups depending on the types of anastomotic leakage (RVF, n = 19 vs. CL, n = 17). Patients’ demographics and perioperative outcomes were compared between two groups.

Conclusions: Compared to CL, RVF is a later complication developed more frequently from patients who have lower level of anastomosis or received neoadjuvant chemoradiotherapy. In addition, this study’s findings suggest that RCA might be considered as a successful treatment strategy for RVF. 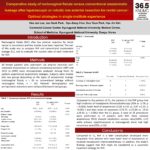