Introduction:
Pancreatoduodenectomy is a formidable procedure involving complex resection and reconstruction. In this fast growing minimal access surgery era, such complex and challenging surgeries are being performed by laparoscopic method in increasing numbers.Though technical feasibility had been established beyond doubt, very few studies compared its outcome with open approach. This article aims to review our comparative experience of Laparoscopic pancreatoduodenectomy (LPD) with its open counterpart, open pancreatoduodenectomy (OPD) in reference to perioperative and longterm outcome.

Method:
A retrospective review of prospectively maintained data from1998to2013 was done. Out of 533 patients who underwent pancreatoduodenectomy for pancreatic and periampullary tumours, 393 underwent OPD and 140LPD. Patients with borderline resectability and associated vascular resections were excluded from the study. These two groups were compared on the basis of overall survival as the primary end point and perioperative variables as the secondary end points.

Results:
Patients in both arms were similar in terms of age,sex, BMI, ASA grade and comorbidities. The mean tumor size is 3.1cms in LPD and 3.6cms in OPD and location is comparable. Operative time is more in LPD group whereas blood loss is significantly less compared to OPD. Periopertive morbidity profiles including pancreatic fistula (8.57%LPD Vs 9.66%OPD) rates are comparable between the groups. Mean hospital stay stay is less in LPD group but this difference fades out in complicated patients. No significant difference was noticed in terms of margin status, no of lymph nodes harvested, node positivity and pTMN stage. The overall five year survival was 29.4% in LPD and 27.1% in OPD.

Conclusion:
This comparative study reinforces the already proven facts about feasibility, safety of LPD. With added benefits in terms of reduced hospital stay, blood loss combining with comparable oncological safety and overall outcome, LPD is a treatment option in expert hands for pancreatic and periampullary tumours 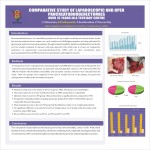