This is a report of a community hospital group practice experience with single-incision laparoscopic cholecystectomy.

From July 2009 to August 2011, 300 patients (225 female and 75 male) underwent SILS cholecystectomy for biliary tract disease. No patients were excluded based upon BMI, age, prior abdominal operation, or pre-operative diagnosis including acute cholecystitis. Questionnaires were sent to patients to evaluate pain, return to normal activities, as well as overall satisfaction with the procedure.

A significant learning curve was observed for this procedure. Median operative time overall was 49 minutes. The first 50 cases and last 50 cases had median operative times of 53 and 41 minutes. Ninety-one percent of cases were performed on an outpatient basis.  There were no conversions to open cholecystectomy. One patient was converted to traditional laparoscopic cholecystectomy, while another required placement of a single additional trocar. Ninety-three percent of patients had documented cholelithiasis/chronic cholecystitis on pathology. Five percent of the procedures were performed for acute cholecystitis. The cost of SILS cholecystectomy was equivalent to traditional laparoscopic cholecystectomy.

Eighty-five percent of patients described less or equivalent pain when compared to previous operations. Ninety-nine percent were pleased with the cosmetic aspect of the incision. Patients returned to normal activities within a week of operation. Ninety-five percent described complete resolution of symptoms.

SILS cholecystectomy is an equivalent technique to traditional laparoscopic cholecystectomy in addressing symptomatic gallbladder disease and may emerge as treatment of choice as it offers improved cosmesis and decreased post-operative pain. 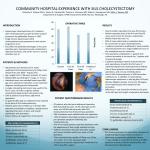