Combining Appendectomy with Cholecystectomy: Is It Worth the Risk?

INTRODUCTION: Appendectomy performed at the time of other procedures has long been a point of controversy among practicing surgeons. We hypothesize that appendectomy at the time of cholecystectomy results in worse outcomes than when either procedure is performed alone, even in the absence of ruptured appendicitis.
METHODS AND PROCEDURES: The ACS-NSQIP database was queried for all appendectomy alone (A), cholecystectomy alone (C), and both (B). Patients with age <18 years, ruptured appendicitis or abscess were excluded. Demographics, patient characteristics, operative details and outcomes were analyzed, including wound complications, overall morbidity and 30-day mortality by standard statistical methods with significance set at p<0.01.
RESULTS: A total of 155,824 (C), 101,150 (A) and 1119 (B) were performed. 0.4% of all laparoscopic cholecystectomies were performed as (B), compared to 2.6% of open cholecystectomies; however, open (B) comprised only 0.3% of all cholecystectomies (p<0.0001). In comparing (C) patients with (B), although groups were similar for recent MI or angina, functional status and level of dependence, hypertension and COPD, significant differences between groups were present, and patients in B appeared sicker by multiple parameters (Table). With multivariate analysis controlling for age, BMI, modified CCI, ASA score, laparoscopic approach, wound classification and emergency status, patients who had (B) had worse outcomes with significantly increased risk of wound complications (OR=1.59, CI 1.23-2.04), minor (OR=1.68, CI 1.41-2.01) and major morbidity (OR=1.49, CI 1.19-1.87) than (C).
CONCLUSION: These data indicate that combined appendectomy and cholecystectomy produces worse outcomes than either procedure performed independently, with a higher incidence of wound complications and morbidity. Overall, however, patients who undergo simultaneous procedures appear sicker with higher incidence of emergency cases, sepsis and disseminated cancer, CCI and ASA class. Further investigation is needed to define appropriate indications for these concomitant procedures as well as to identify the key factors that determine outcomes. 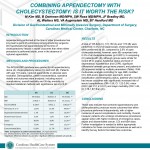