Colonoscopy simulator training and transfer of skills to clinical practice

Introduction:
Surgical residents have learned flexible endoscopy techniques by practicing on patients in hospital settings under the strict guidance of experienced surgeons. Simulation is often used to "pre-train" novices on endoscopic skills before practicing on actual patients; nonetheless the optimal method of training remains unknown. The purpose of this study was to compare endoscopic virtual reality and physical-model simulators and their respective roles in transferring skills to the clinical environment.

Methods and procedures:
Twenty-seven novice surgical interns served as participants in this study. At the beginning of a skills development rotation, each intern performed a baseline colonoscopy on a real patient under faculty supervision. Their performance was scored using the Global Assessment of Gastrointestinal Endoscopic Skills (GAGES). Subsequently, interns completed a three-week flexible endoscopy curriculum developed at our institution. One-third of the residents were assigned to train with the GI Mentor platform exclusively, one-third of the residents were assigned to the Kyoto simulator, and one-third of the residents trained using both simulators. At the end of their rotation, interns performed one posttest colonoscopy on a different real patient, again under the guidance of experienced faculty and scored using GAGES. A survey was administered after completion of study participation to evaluate self-reported levels of anxiety, colonoscopy performance and simulator preference.

Results:
A statistically significant improvement in the GAGES total score (p<.001) and on each of its subcomponents (p=.001) was observed from pre- to post-test when analysis was performed for all groups combined. When subgroup analysis was conducted, trainees using the GI Mentor or both simulators showed significant improvement from pre- to post-test in terms of GAGES total score (p=.017 vs. p=.024 respectively). No single training condition was shown to be a better training modality when compared to others in terms of total GAGES score or in any of its subcomponents.

Survey analysis reported that trainees in the GI Mentor and Kyoto groups had a statistically significant decrease of self-reported anxiety (p=.014, p=.038 respectively) and self-reported improvement in their performance (p=.0.05, p=.008 respectively) in the post-testing phase. However, these differences were not significant for trainees assigned to both simulators despite showing statistical significant improvement in their post-testing GAGES total score (p=.024).

Other variables such as total colonoscopy time, time to reach the cecum, and time with a clear lumen were not significantly different between groups. The same applied for case difficulty, degree of bowel preparation and faculty intervention showing similar characteristics for patient selection among groups.

Conclusion:
Colonoscopy simulator training with the GI Mentor platform exclusively or in combination with a physical model simulator improves skill performance in real colonoscopy cases when measured with the GAGES tool. 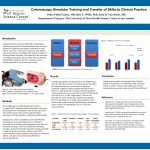