Objectives: The aim of this study is to establish if colonoscopists with varying levels of expertise can accurately self-assess their ability to perform colonic polypectomy. An ex-vivo animal polyp simulator previously validated for skills training was used to perform the practical tasks.

Conclusion: Colonoscopists of all levels can reliably self-assess their ability to perform a simulated polypectomy using the WIMAT colonoscopy suitcase. This is independent of the level of difficulty of the task. This has potential application for use by endoscopists who are preparing for accreditation or re-validation. 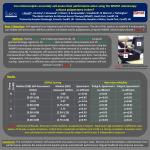