Introduction: The established endoscopic submucosal dissection (ESD) technique for removal of large colonic polyps requires pushing of the scope tip, equipped with a plastic cap, under and around the polyp. The cap provides traction and “stand-off” between tissue and the colonoscope camera, but substantially limits the view and subjects it to debris and poor visualisation from electrosurgery. We considered using a Double Balloon (DB) device with independent inflation control and variable distance function to overcome these limitations, in particular providing tissue traction.

We set out to evaluate the standard cap technique versus a novel DB technique (no cap) in performing ESD in an experimental model. 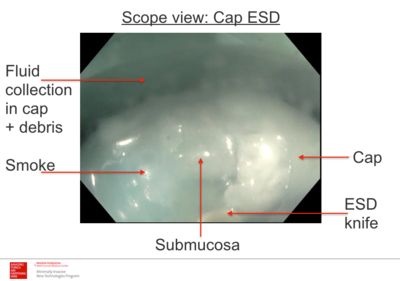 Variables measured were time to complete procedure, % completion (procedure time was limited to 80 minutes), clear margins, perforations, and a 6 point scoring system for various parameters relevant to endoscopy (Scoring system: 1=excellent, 2=good, 3=above average, 4=below average, 5=minimal, 6=none). Data was recorded and analysed using Graphpad Prism software. All procedures were recorded (both the endoscopic view and external operator view) and resected specimens (both colon and removed polyp) photographed. 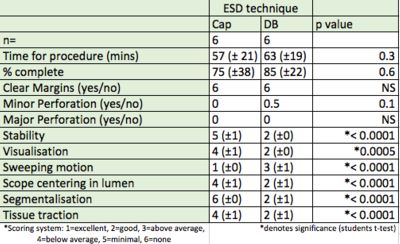 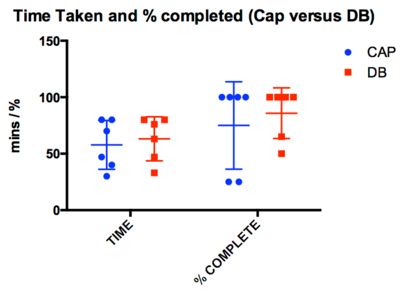 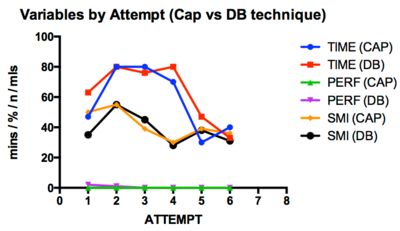 Limitations: Ex-vivo nature of the study, one operator and sample size.

Conclusions: In an experimental ex-vivo ESD colon polypectomy model, an independently controllable DB endoscopic system substantially improved stability and visualization compared with cap-assisted ESD, with a similar safety profile. Despite the early nature of this feasibility study, the DB assisted technique holds promise to expand the capabilities of endoluminal therapy.