We performed a survey of 112 international experts in bariatric surgery from 23 countries.
Surgeons were classified into; surgeons who preferred Band or the Sleeve (Pro-BS Surgeons) and surgeons who preferred the Mini-Gastric Bypass (Pro-MB).
Results: In summary Pro-MB Surgeons performed significantly better on all questions than Pro-BS Surgeons! Some examples are provided below:
"There are many large scale studies that show no increased risk of gastric cancer after Billroth II" i.e.: 30 yr f/u, over 500 pts., "Risk of gastric cancer is * Not * increased after partial gastrectomy." Bassily R, .J Gastro-Hepatology. 2000. 44% of Pro-BS Surgeons did NOT agree with this statement and 12% of Pro-MB surgeons disagreed.

"Unoperated Gastric Ulcer patients have double the risk for Gastric Cancer: Am J Gastroenterology 2007 Jun;102(6):1185-91. Pub 2007 Apr 13. Long-term risk of gastric cancer by subsite in operated and unoperated patients hospitalized for peptic ulcer. Bahmanyar S, et al. 29% Disagreed with this question, even though the relevant article was quoted and referenced for them.

"Numerous Studies Now Show that the Band and the Sleeve can increase acid reflux and be associated with Barretts & Esophageal Caner." While 64.5% of Pro-BS surgeons agreed with this statement 35.5%, over 1/3 disagreed. This in spite of 90% agreement with "GERD Increases Risk of Cancer of Esophagus" and "Treating or Avoiding GERD may protect & prevent Barrett’s & Esophageal cancer."

Overall it seems probable that Pro-BS surgeons are not less intelligent than Pro-MB surgeons. If that is so how can we explain the significantly higher error rate among the Pro-BS surgeons on questions of fact.

Many of our questions were referencing studies that tended to show the MGB in a positive light. Cognitive biases such as Reactance (the urge to do the opposite of what someone wants you to do out of a need to resist a perceived attempt to constrain freedom) may have led Pro-BS surgeons to answering questions incorrectly.

Conclusions: Studies clearly show a relation between surgeon’s knowledge performance and patient outcomes. This study demonstrated that surgeons who prefer the Sleeve and Band commonly make erroneous judgments about bile reflux, acid reflux, esophageal & gastric cancer and other important issues. If we hypothesize that this documented error rate is because of various cognitive biases then we may also have a means of improving these surgeon’s knowledge and performance. 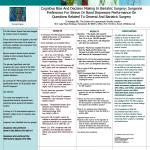