Methods
A consecutive series of 211 patients underwent SILC from August 2008 to September 2012. All cholecystectomies were attempted through a single incision on an intent-to-treat basis. The SILC group entailed standard laparoscopic instrumentation with three 5mm ports. A commercial platform was not used. Patient demographics including height, weight, body mass index (BMI), pathologic diagnosis, ASA classification, operative time, complications, conversion, narcotic use, and length of stay(LOS) were recorded. Data for a matched cohort of patients(n=44) undergoing a traditional 4PLC were used for comparison. Data were compared using a t-test and multivariate analysis with a p<0.05 for statistical significance.

Conclusions
The data suggests that morbidly obese individuals, especially men, may require conversion to a four-port cholecystectomy. However a S-SILC is associated with a shorter LOS and fewer narcotics postoperatively. The decrease in postoperative narcotics may reflect a smaller fascial incision at the umbilicus using standard laparoscopic ports versus the incision for a commercial platform. Finally, a commercial platform is not a requirement for a S-SILC. 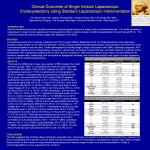