Cholecystectomies: A Comparison of the Acute Care versus Non-acute Care Surgery Experience

Introduction: The acute care surgery (ACS) model is a relatively new concept implemented in surgical departments to provide care to patients with urgent surgical needs. The objective of this study was to investigate the outcomes of those undergoing cholecystectomy by acute care surgeons compared to those performed by non-ACS general surgeons.

Methods: An IRB-approved, retrospective review was conducted of all non-cancer patients who underwent cholecystectomy between July 2012 and June 2015 in an academic health system. Data collected included service, demographics and history, operative details, post-operative complications, and costs. Data are presented as incidence (%) or mean ± SD, and a p-value of <0.05 was considered statistically significant.

Conclusions: The acute care surgery model was adopted to meet a need for in-house emergency general surgery procedures. This study demonstrates that in the setting of cholecystectomy, compared to other general surgeons in a large academic health system, ACS performs a greater percentage of non-elective cases for acute gallbladder problems with a higher complication rate, longer operative times, longer length of stay, and at a greater cost, perhaps due to the higher acuity of patients and the gallbladder diseases encountered. 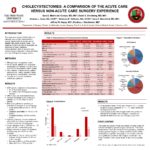